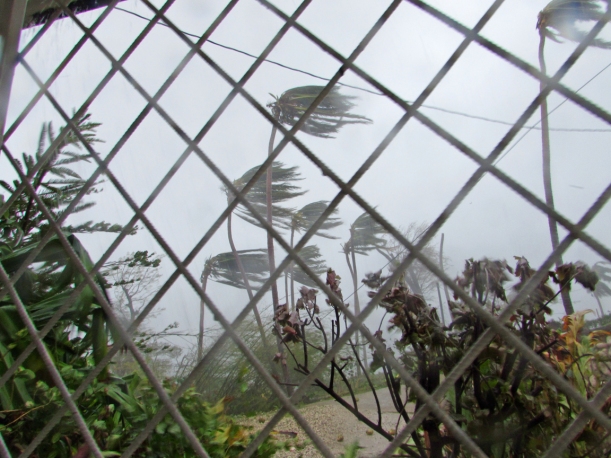 It is impossible to describe the power of 140 mph winds!

We didn’t see it coming. We couldn’t believe it was coming right our way. We had only been back to Haiti for a month and we were just settling in. Then it came to the point there was no longer any question we were in the line of fire and we all started really moving to prepare! In all that time the Haitians were in even more denial…such a thing had never happened in any of their lifetimes…and God wouldn’t do that to them. So they never prepared. Then it was too late!

Experiencing the hurricane is indescribable. The increasing roar, the plywood banging on the windows, the sound of tin roofs being destroyed all around us; only the arrival of dawn seemed to help since we could finally peer out. We could already see a new world out there as everything appeared flattened. We had no idea.

This is the group that stayed with us a few days…and Jersey the dog!

We were blessed to keep three single missionary ladies, Janae, Courtney, and Judith (as well as Jersey the dog), for a few days as they had tin roofs on their homes. During the storm we all spent the long night camped in our living room trying to sleep between mopping water and the tin banging. We shared many meals and many encouraging words that week.

Cleanup started immediately after the storm as several missionary families lost their roofs and we had to quickly move their belongings to other homes. We hardly had time to look around, but it was amazing to realize that every leaf was gone, every tree was either down or shredded. We noticed a very odd thing: many white buildings had turned shades of green or yellow! Someone figured out that the leaves had smashed against the buildings so hard that they had splashed their chlorophyll all over them!

Lots of beautiful trees now lying across the road! 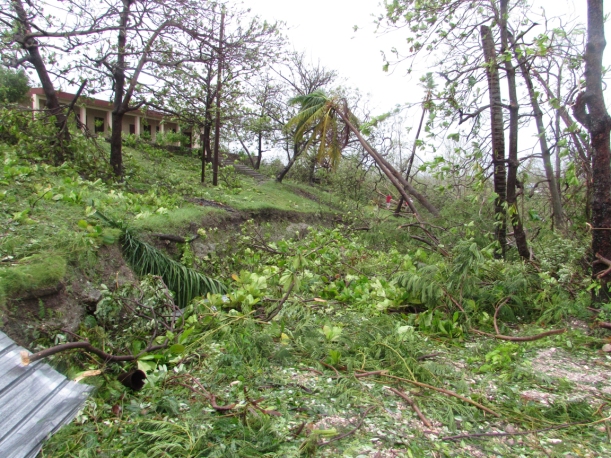 The main road out in front of child care!

The morning after the hurricane, all the missionaries are making recovery plans!

No one had even a scratch, thanks to many prayers!

Many, many tin roofs were simply gone!

The trees were stripped of all their leaves! This cloud looks like judgement to come!

Many Haitian homes, churches and school lost their flimsy tin roofs. Some had walls collapse as well. Many streets and buildings were flooded and were left with lots of mud. Everything was
wet and stinking. The aftermath was overwhelming. Everyone had their normal life suddenly turned upside down.

Everyone was needed to help clean up homes, roads, and the school!

You really appreciate running water, showers, electricity and gas when you are suddenly without all of them at once! These conveniences can easily be taken for granted. A real adjustment has been poor internet and phone service, and in the weeks since the storm there have been days on end without anything working!

No running water for a week. Lots of wet towels and laundry had to be dealt with! We had stored water before the hurricane so we did laundry the Haitian way. 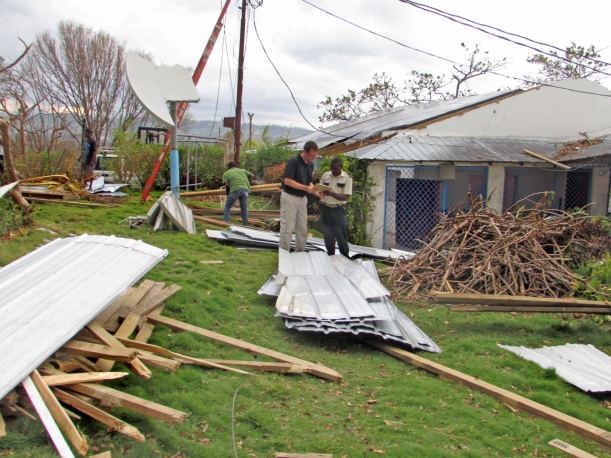 Since the hurricane we have had even more of a platform to share the gospel, warning Haitians that God has given them another chance to repent, turn from sin and find the Savior! God is rich in mercy towards any that fear him!

We experienced the might and power of God through a storm, and it was enough to put the fear of God back in our lives. How about you? Do you fear the one that the heaven of heavens cannot contain or do you need a storm in your life to wake you up?

We found this worker with this shirt the day following the hurricane! Keep praying for 2 Chronicles 7:14.