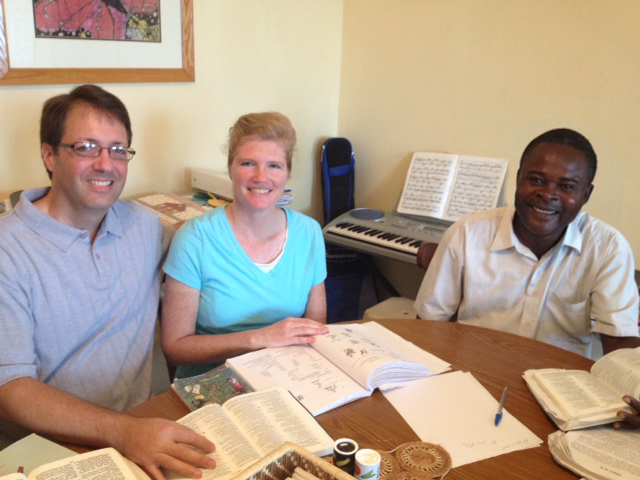 Pastor Jean-Claude comes for language classes three days a week. We start each session by reading a verse in Creole and then he prays for our ability to learn!

We have been allowed three months to study Creole. It has been very interesting to learn a new language as a family! We feel like we are back in Kindergarten in some ways. Or think of how a baby starts talking and you get the picture…

Creole is one of  Haiti’s two official languages, along with French. It is a language spoken by about 8.5 million people here (90% of the country), while the remaining 10% percent is bilingual in both Creole and French. The Creole language is based largely on French, with influences from Portuguese, Spanish, Taino, and West African languages. Haitian Creole emerged from contact between French settlers and African slaves during the Atlantic Slave Trade in the French colony of Saint-Domingue (now Haiti). Creole resulted from African slaves’ efforts to speak the French that they heard when they arrived in the colony. Slaves came from all over West Africa and spoke many different languages. More than 90% of the vocabulary of Creole is of French origin, yet French people can’t understand Creole. This is because the grammars of the two languages are very different.

Mamis teaches both Grant and Trinity one on one.

We feel we have only started scratching the surface, but are probably farther along than we think. Listening is the the hardest for us because Haitians shorten so many of their words, making them hard to catch. One word can also have several meanings, so you have to understand the context to catch the definition. When Haitians speak quickly the words tend to run together and it’s hard to tell if they are saying several short words or one longer word. We know the phrase well in Creole, “Please speak slowly.” It is good for us when Haitians come to our door and can’t speak English very well. It is sometimes challenging to figure out what they want! It can be somewhat humbling when we are corrected, but I guess it happens to every language learner in the land of the native language they are learning. We tell our kids, “Now you know what it feels like!”

Dinold, a new Haitian friend, comes to help us learn Creole and also get a bite to eat!

Our (Mike & Susie) teacher, Pastor Jean-Claude, tells us of some funny stories from the past when missionaries chose to use the wrong word…then he can’t stop laughing! He comes to our house three days a week. We really enjoy him! He has such a warm personality and has so much patience. He also explains the Haitian culture by sharing common phrases and stories. He is an English professor at the American University and a public high school here in Les Cayes and has taught many, many missionaries the language. He also pastors a MEBSH church nearby, so he is very busy. Trinity and Grant have a teacher, Mamis, who comes almost every afternoon (she also cleans and cooks for the Yordy’s who live above us). We also have a young man, Dinold, who comes before school to help us out, which is also a good way for him to earn extra money. One of the best paying jobs here is language instruction. Those that can speak English well have an advantage over the rest. 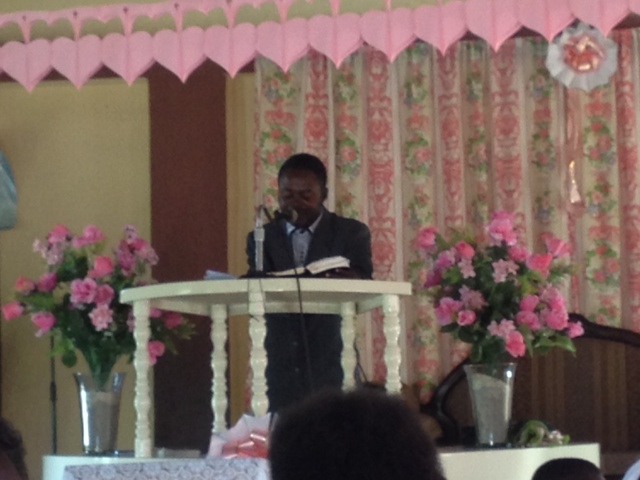 Pastor Jean-Claude preaching in his church near the airport north of Les Cayes. That is one very pink sanctuary!

A recent visitor gave us this encouragement about learning a new language and adapting to a new culture: “Strong trees grow slow.” We often remind each other of that when we feel challenged. Besides, we have only been here three months!