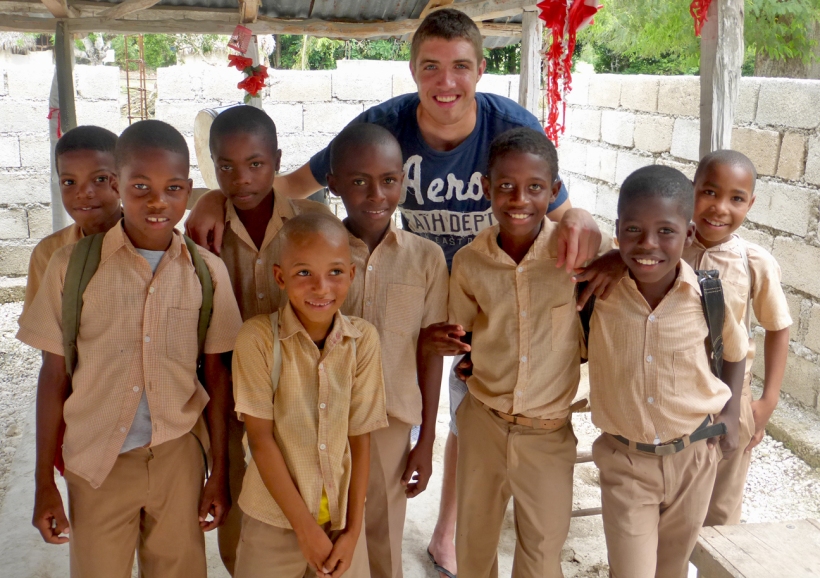 The boys from Godi primary school couldn’t wait to get a photo with Evan. He was able to catch their attention!

Evan, Trinity, and I (Susie) recently had a wonderful opportunity to visit several HCH schools (Help a Child in Haiti) with Adline, the director. Each day we went up the mountains to visit two schools and to meet the kids and their parents. The trips up the mountains were never easy, and sometimes it took a few hours to get to the destination. There were times when prayer was the only answer to moving forward past the wide crevices, holes, and dips. It was very bumpy and if you didn’t hold on, your head would feel it!

Here is the Godi primary school.

A hot meal for lunch is so appreciated!

Jesus said, “Let the little children come unto Me!”

The kids couldn’t wait to get a photo quick before school started!

This group of girls thought we were interesting!

Going up the mountains was always an adventure! We decided to take hold of some opportunities we saw. While Adline drove, we gave gospel tracts out the window. She slowed down every time we reached out with our tracts to the passer-byers. Some came by on donkeys or horses, some on motorcycles, and others were walking. We never knew what we would see on their heads! They were always receptive to the tracts. What a joy we felt in our hearts!

Here is a man that was given a gospel tract and he couldn’t wait to read it!

Here is a lady coming down the mountain to sell chairs. She was a lot happier after Adline bought one! Notice her shirt!

We saw many kids walking so we decided to send rocket balloons out the window. That was fun and a sight to see! It brought quite a surprise along with smiles, laughter, and pure joy….over simply balloons. In between gospel tracts and balloons, we laughed, told stories, and practiced Creole. It was an amazing trip! 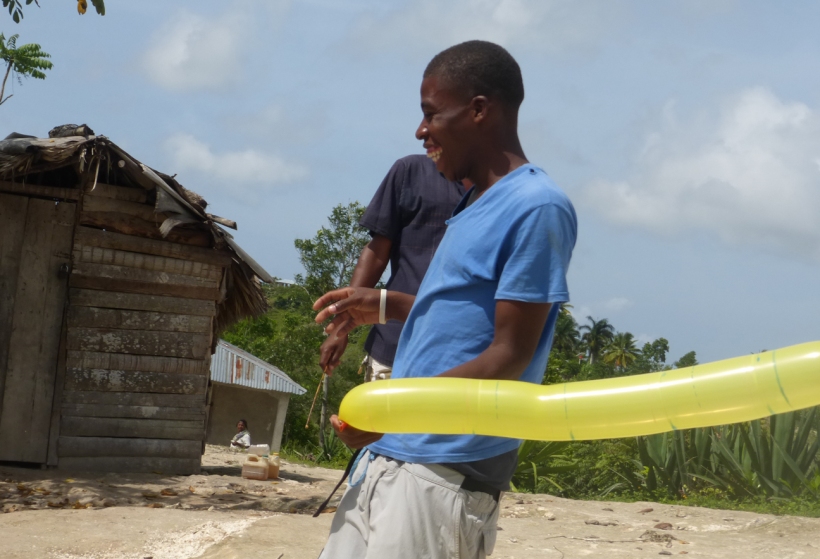 This young man was so excited with the balloon he caught!

We actually stayed a few days at a guesthouse at one of the schools, Puit Sales. We were thankful for a place of rest after the shaking up and down the mountains every day.

This is the Puit Sales school where the guesthouse is. Every morning the kids line up to salute their flag and have a prayer before school begins.

We had a lovely cook at the guesthouse, Madame Julien, who loved the homemade dress we gave her (made by Martha Lou Marty). She was so excited to try it on! It really looked nice on her. 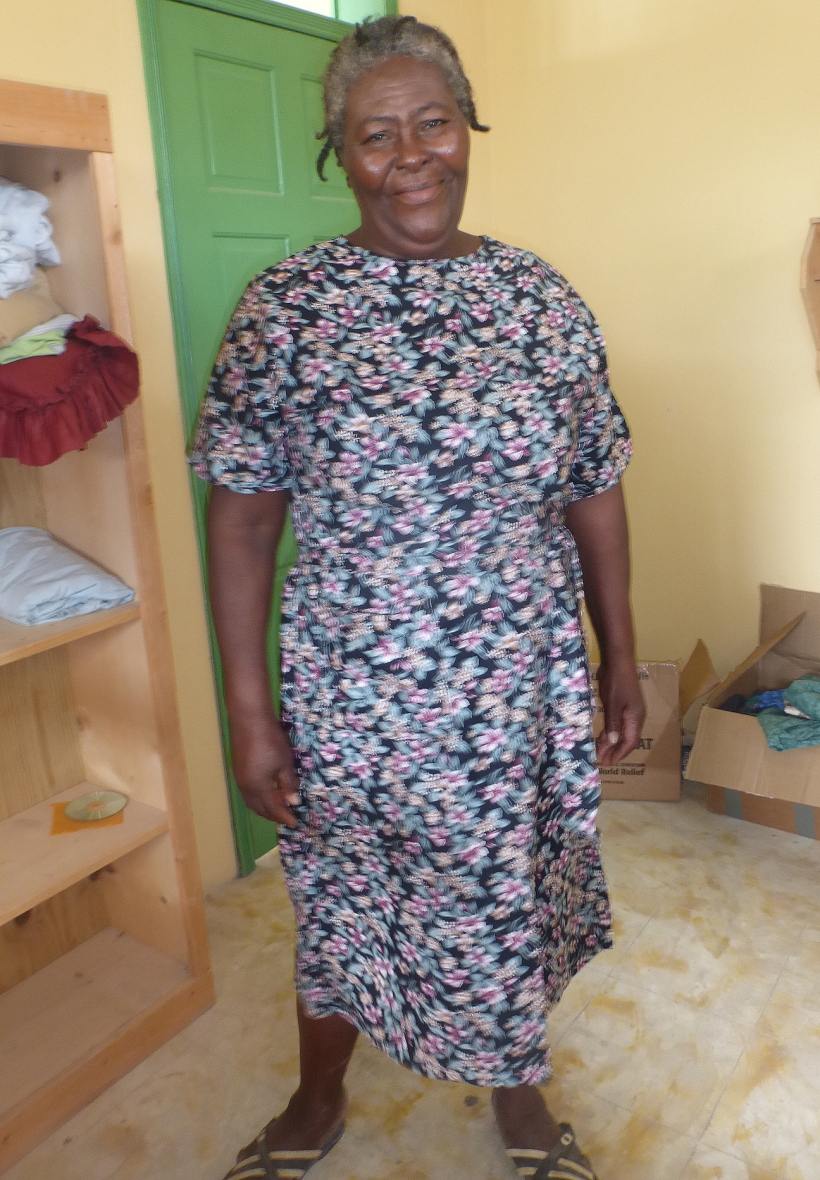 Madame Julien was very thankful for the dress we gave her! She was a lot of fun to visit with.

Auteur, an HCH worker, went with us to every school (pictured below). He sat in the back of the truck and many times told Adline which direction to go. We felt much safer with him with us. He was really fun to joke around with!

We were so glad to have our “back seat driver,” Auteur, along!

When we arrived at each school, the parents (and sometimes the kids) were waiting inside the church to meet us. Adline explained to us before we arrived at these schools that she wanted me to share the gospel with the parents because many of them are not Christians. She introduced us to each group of parents, usually over 50 people. There was a sea of faces, a different culture than my own, but people who Christ died for. Each time I opened my mouth and trusted in the Holy Spirit to give me the words to speak. I started out by asking them questions on what God’s attributes are? They willingly participated! Adline translated with enthusiasm and I knew that God ordained this.

Parents of the kids from the Zabo school.

When the gospel message was given at each school, there were some who shed tears, others had heads bowed in humility, and we remember one lady whose hand covered her mouth the whole time the message was given. We trust that the Lord will give the increase to His Word which is sharper than a two-edged sword that pierces the heart. Only He searches the hearts of men and brings conviction through His Holy Spirit, and draws them to the cross.

Afterward, we handed out pillowcase dresses and girls/ladies underwear. It was quite an experience! – not only to see the girls excited over the dresses and underwear, but the mothers as well. 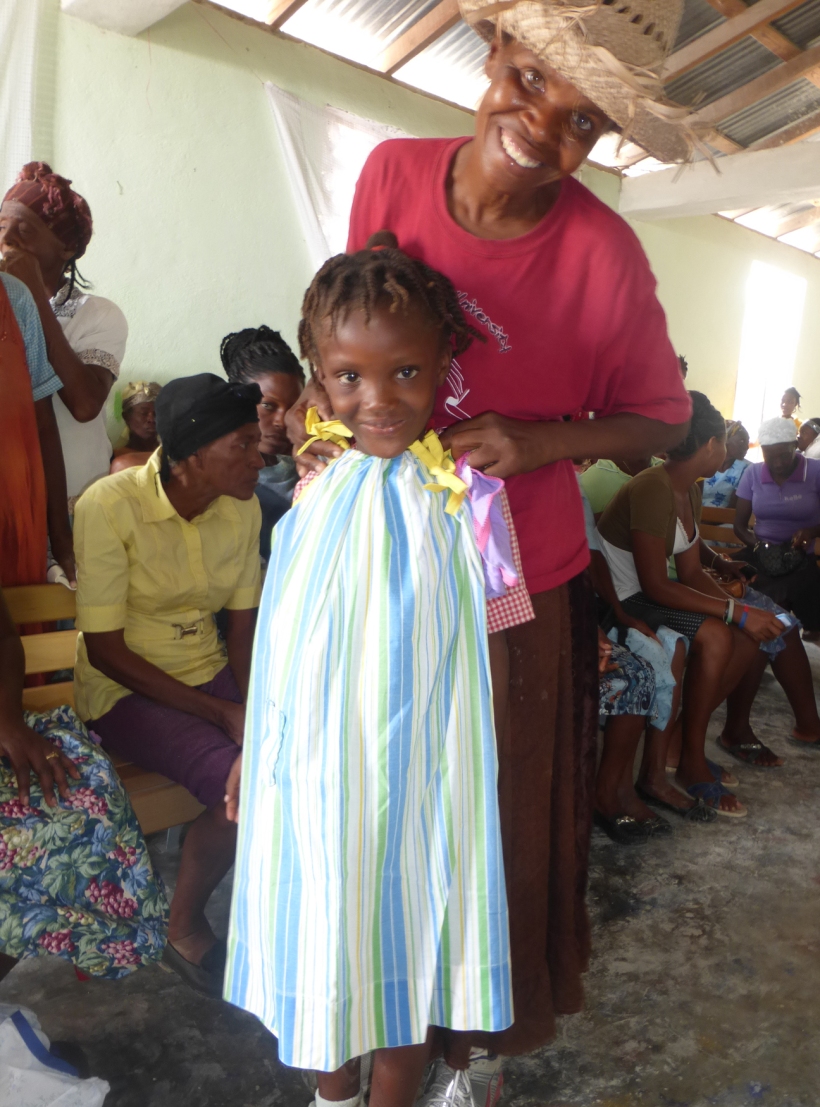 Here is a mother and her daughter excited about her new dress!

These precious kids were so curious, looking in the doorway while the dresses were being passed out or maybe they wanted to get a better look at us “white” people?

Here is another mother and her daughter excited about her new dress!

Adline did a great job distributing the clothes! She picked out and wore a pillowcase dress herself!

Handing out the clothing was very chaotic but Adline was calm and in complete control. In this culture, they don’t form lines! We were a bit overwhelmed but glad that it didn’t faze Adline at all. An overwhelming joy come over us that brought tears to my eyes! The whole picture of reaching out to them spiritually and then meeting their physical needs by giving them dresses/underwear (that so many of you worked so hard in making) was a true joy!  Thank you for your labors of love to these precious souls who truly are in need. 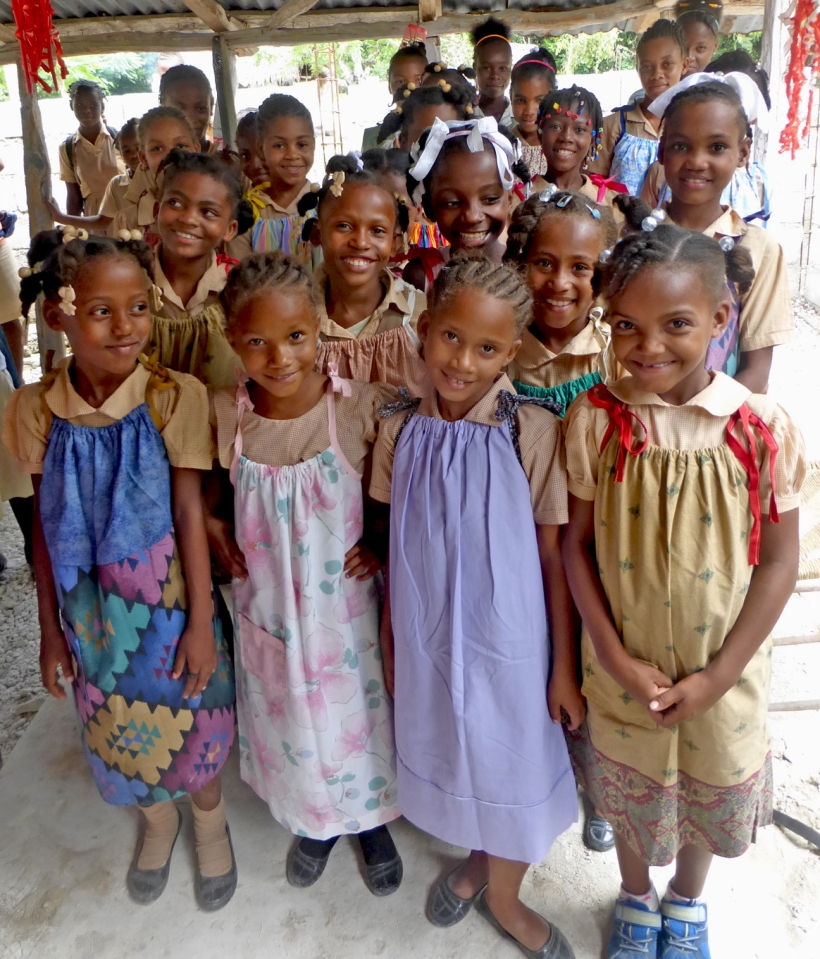 Look at these cute girls in their new dresses! 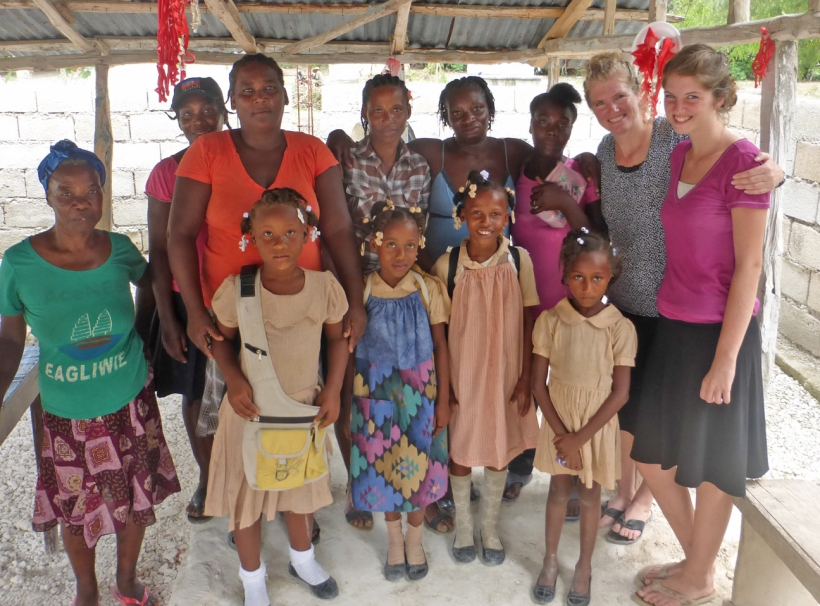 It was a blessing for us to meet these ladies and their children!

A group of high school girls with their new dresses! Adline has a good rapport with these girls.

We also visited a few houses of parents who have sponsored children. The one house we visited was an unique experience!

This was one of the houses we visited. Can you imagine 14 people living in this house?

Adline wanted to get more information about the sponsored child and her family. We couldn’t get all the way there by car so we walked up a path that led to her house. We sat and visited for awhile and met the sponsored child’s family, including her grandma who lived nearby.

The sponsored child is in the bright red shirt with part of her family. Not all the family was home that day. Her grandma is on the far left. Her 19 year old sister, with her baby, on the far right. 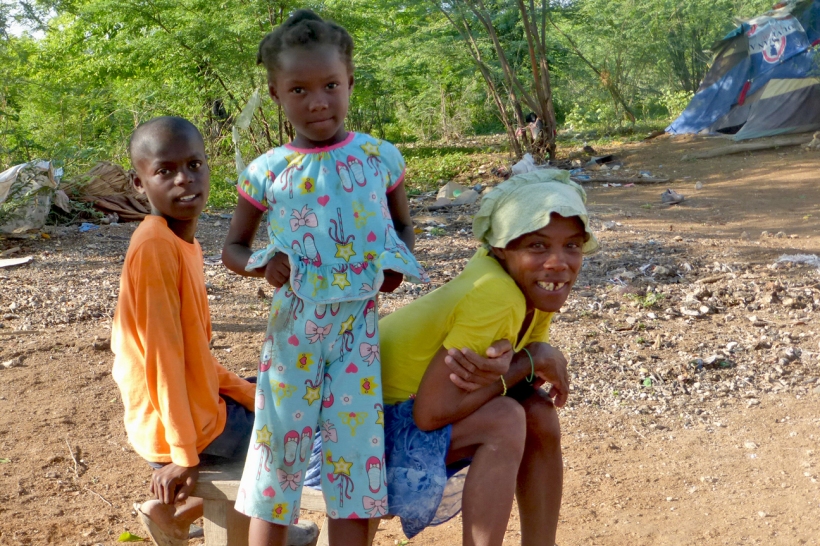 Here is the mother with two of her children. Check out her “Laura Ingalls Wilder” bonnet.

As we sat together, Adline told me that this family really needs to hear the gospel message. The mother lived with her boyfriend and they had 11 children. (At that time, the boyfriend was not there and not all the kids either.) And the second oldest girl, 19 years old, was already pregnant with her first child and she was not married either. (Adline mentioned to us that this happens often with kids that are not sponsored. They get into trouble. But she didn’t see a good example with her mother either.) We prayed for the Holy Spirit to speak through us boldly with love for these souls who desperately needed a Savior. So Adline and I made a team of sharing the gospel message wherever we went.

When we went to one of the schools, Trinity began sharing the gospel with five high school kids and it multiplied to about 30 kids.

Trinity sharing the gospel message at the Godi high school. The young man who was answering her questions was straight across from her, standing against the wall.

She had no idea that she would be surrounded by so many her own age but the Lord gave her boldness and the words to speak. She said she had no fear but instead a desire to share with them salvation in their Creole language. It was one of the highlights of the trip for her!

At one of  the schools, they made us lunch. It is always humbling when they want to feed you, knowing that they give what they have from what little they do have. The lunch consists of chicken legs, plantains (almost like a dried potato), white yams with sauce, cabbage slaw and sugary coffee, just how the Haitians like it. 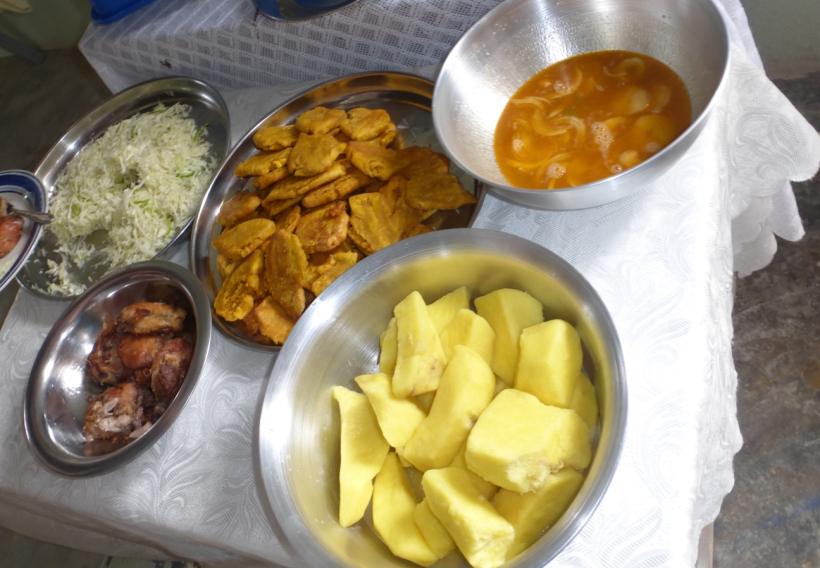 They served a feast for us!

Another school, Boucan Mouran, was at the peak of the mountain. It has a gorgeous view overlooking other mountains and the sea far below. We were so excited because this is where our sponsored child, Mantha, went to school. This was the first time for Evan and Trinity to meet Mantha. She came to us right away when we got out of the car! There was tremendous joy for them to finally see each other in person, not just in pictures. The pictures just don’t compare to really coming face to face with your sponsored student in real life!

Trinity and Mantha have faithfully written to each other for about 5 years. They finally got to meet each other! They were overjoyed! What will it be like to meet our Creator who we talk with every day? What a day that will be!!

Later, we found out that the pastors from Boucan Mouran sent home food with Adline – spicy fresh fish and white yams! It was humbling again to see their generosity! We actually found it hard to eat this tasty fish because there was so many tiny bones throughout it. It takes skill to eat this! We were thankful that none of us choked on the little bones!

Adline dared all of us to eat the fish eyes – and Trinity took the plunge! I couldn’t watch her put it in her mouth! Evan couldn’t take it that his little sister would be braver than him so he was also up for the challenge and ate one too! I didn’t care to meet the challenge!  Evan then said jokingly, “Well, we might as well eat the spine too! (as he held it up in the air).” Adline said, “Oh sure, that is the best part! It is so tasty!” And she took it from him, put it in her mouth and crunched away! We were quite surprised…to say the least! Evan is quite a joker, but even he was taken back a little with that one!

One evening Adline took us to the beach and we stayed until it was dark. While she was driving us back to the guesthouse she saw a crab crossing the road. She slammed on her brakes and got out and picked it up! She said, “These are great to eat! I cannot pass it up!”

Adline was so excited about her crab that she picked up!

She drove stick while holding onto the crab! It looked a little difficult to do both – hold onto the crab and drive stick shift! I made it clear that I wouldn’t hold the crab but would help her shift. That crab was kept alive until it made it to Adline’s house for crab soup.

Our trip ended with this beautiful sunset! Our God is awesome! “O magnify the LORD with me, and let us exalt His Name together.” Psalm 34:3

3 thoughts on “A Mission Trip to Remember!”