We were blessed to spend a week of VBS with one of our sponsored children, Mantha!

We were able to join a week-long VBS camp out in the Puit Sales school compound as soon as we returned to Haiti! Our ministering partner in Haiti, HCH, holds three weekly camps back-to-back in August. By actually seeing the camp in action and by observing Adline and the wonderful job she does with what she has, we were able to find lots of ways to support her in the future.

The theme for the week was the Ten Commandments. Adline even composed a song about the commandments for the kids to learn them better! Every day they learned two new commandments and then learned two new verses of the song. This song will definitely go on to be published in Haiti as the kids loved it! The Ten Commandments had an effect on the kids. Trinity overheard a conversation with two kids. One of them wanted to take someone’s bracelet and the other one said “Do not steal! Don’t you remember?” He was quickly reminded. 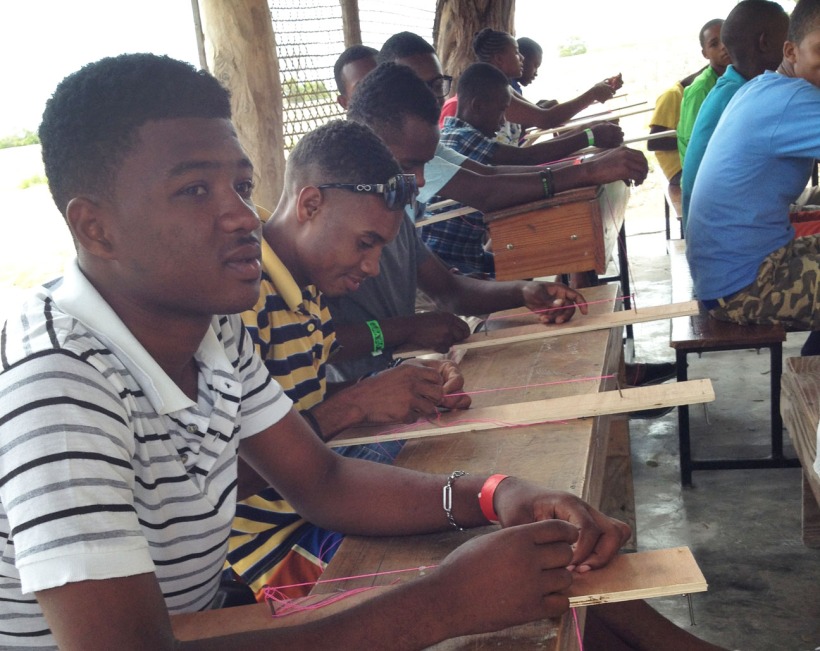 We were amazed at how eager even the boys were to learn how to make bracelets!

We were included in the meals, the lessons and the evening programs, and it was a huge blessing! The evening programs consisted of reciting Bible verses, singing songs (solo or duets), and a contest between which room knew the most on their lessons for that day. We slept in the second floor guest house as did many of the other workers. One night we didn’t have electricity (no fan) so we slept in a classroom near the kids to get relief from the heat. We also learned the art of Haitian bracelet making. All the kids participated in this every day, even the youngest to the oldest boy there were really interested.

Another activity they really enjoyed was the room decorating contest. For three days, each room redecorated their space in only one hour, and they were so creative! Some of the ideas were a restaurant, a phone store, a cinema, a doctor’s clinic, a courtroom, a conference room, or homes. The most interesting was the room that compared the rich and the poor! They had to scurry around the compound searching for items to use to fix up their room. It was all about imagination. 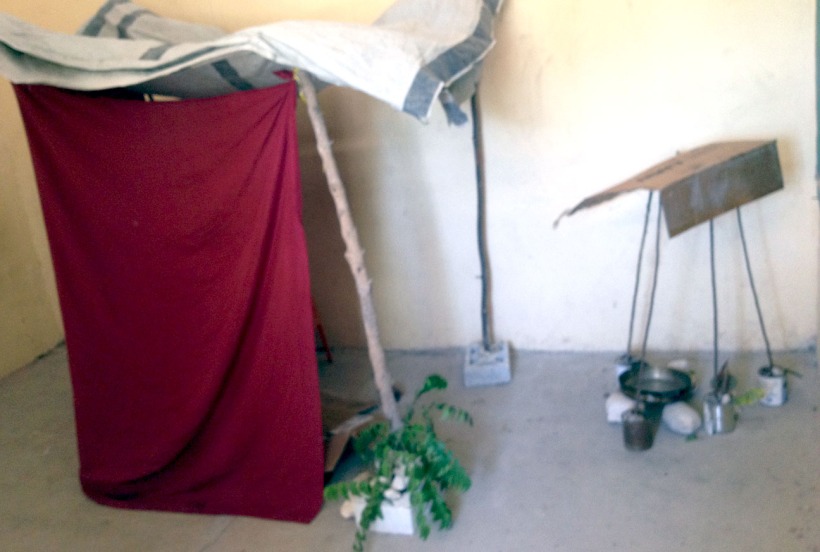 An outstanding example of the room decorating contest, this room showed the difference between the rich and the poor in Haiti. This is the “poor” side of the room, a house on the left and a traditional outside Haitian kitchen on the right.

We were especially excited to be able to spend the week with our sponsored child, Mantha, as she was in attendance. We had a lot more time to share many things with her, and she with us. She really liked to touch Trinity and Grace!

Mantha really liked to have Trinity by her side! (Notice there are never books in the benches.)

Working on bracelets together!

Mantha is four years older, but she appreciates Trinity so much!

One afternoon we tried to go to the beach, but it wasn’t very enjoyable with the immense amount of seaweed that has started to plague Haiti’s beaches since this Spring. It literally is piling up on the beaches as far as one can see and it really stinks! We got in the water a short while, but it was thick with loose seaweed and that wasn’t too pleasant.

This seaweed is covering most of the Caribbean beaches, not just in Haiti.

The food was a lot different from what we had in the States, but it was good. We are not used to corn mush almost every meal and drinking warm water all the time. Adline had a lot of canned pork included in the meals and one night we had fresh goat. The main meal in Haiti is always at lunch so we also had to adjust to very light evening meals. One dinner was only a piece of bread served with hot tea! As we ate our bread and water, we remembered with wonder the meals we were just served in the States! (We also couldn’t blame the Israelites anymore for thinking of the food back in Egypt.) The kids at the camp were so thankful for all the food they received and they ate every bit! There was no complaining to be heard. If we didn’t want something of ours, when offered they would eat that too.

It was a long and hot week, but we felt blessed to take part in a truly Haitian experience!

A section of the “store” had a nice selection of pillowcase dresses! 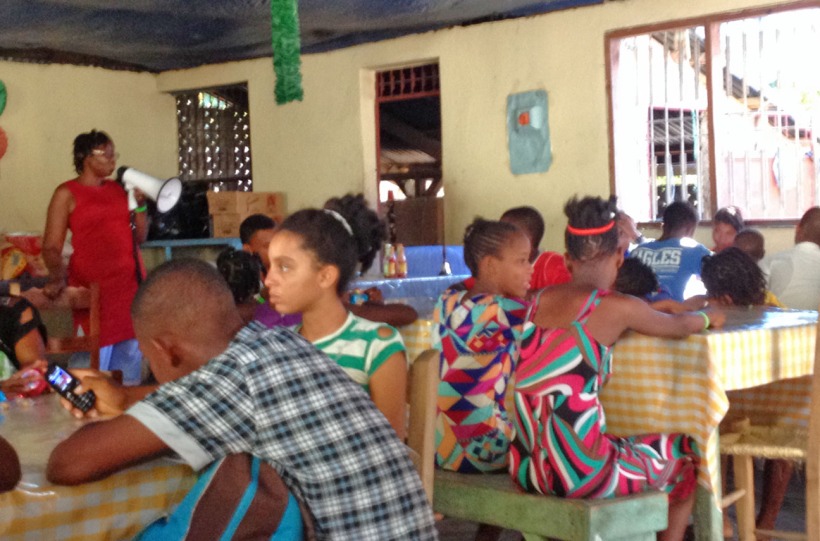 Adline was always directing traffic or giving orders! Some of the kids are already dressed up for the evening program. 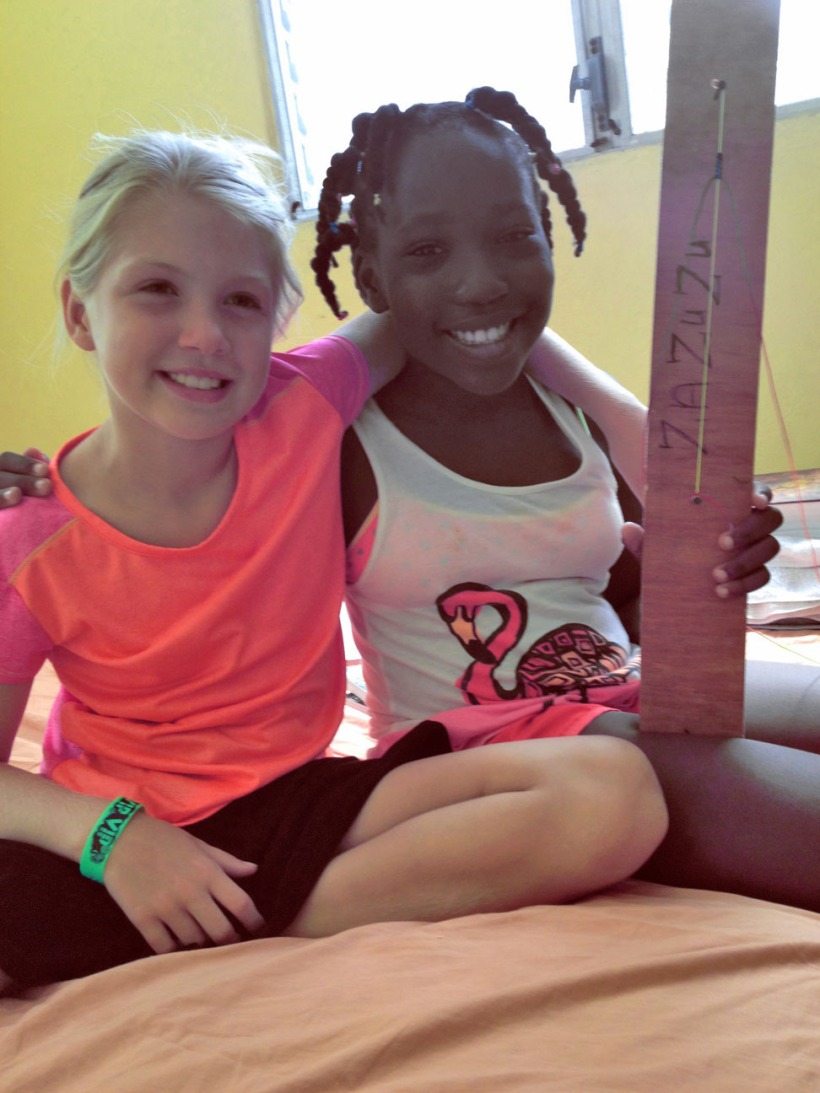 Before they left for home, the kids wanted to show off the book bags they won. Thanks for donating them, they were just thrilled!