Starting on the hike and excited for the climb!

We were excited to go on a three hour hike up the mountains to visit one of the sponsored MEBSH schools! The visits entail taking pictures of each class, the teachers, the school and the church. There is always an interview with the Pastor, (who is usually the administrator of the school) on the attendance of the students, financial accountability, and both academic and spiritual assessment. These are always surprise visits so we can get the real picture.

We could only go so far with the vehicle and then it was time to start hiking! We (Susie and Trinity) didn’t really comprehend a three hour hike so we took one large water bottle to share between us, figuring it was easier than carrying two.

The scenery was beautiful! It started with a climb along a river with many large rocks. We saw houses along the path and Haitians busy with getting water for the day, making food, etc. Others we passed had no problem carrying things on their head to sell at a nearby market. Some were on their way to tend their garden or some kind of work, but some were just sitting and enjoying the conversation of the day.

It was beautiful, though hot!

We also look at these trips as opportunities to reach out to the lost in the area we visit. We were ready with our backpacks full of gospel tracts! Haitians we met were very friendly and are receptive to conversation and visiting. We gave tracts to whoever we passed by and sometimes had conversations about their spiritual condition. Once in while we would encounter a small group. Each one we talked to was thankful that we took the time to talk to them.

As we went, the mountain became steeper and it was hotter as the sun beat down on us. We started drinking our water faster! The heat was tough to endure and there weren’t many people around anymore. We were focused on reaching the destination. We couldn’t wait! The anticipation was great – how much longer? We were tired, especially since we only had a third of the water left, and we knew we had to save it for the way down.

It reminded me of our longing for heaven and the anticipation of what it will be like to get there. The journey to heaven is narrow and steep and few there be that find it. There is a cost to follow Christ and it starts with dying to self with crosses to bear, hardships, trials to overcome, persecutions, etc. The Apostle Paul said, “We must through many tribulations enter into the kingdom of God.” Acts 14:22

“Whoever desires to come after Me, let him deny himself, and take up his cross, and follow Me. For whoever desires to save his life will lose it, but whoever loses his life for My sake and the gospel’s will save it.” Mark 8:34,35

Who are these white people coming here?

As we got closer to the top, winding around the path, we saw the church. But where was the school? There was excitement burning in our hearts as we climbed the rest of the way there. They were surprised to see us and they welcomed us with love and joy! It was just really good to finally arrive and it felt so good to sit down in the chairs they offered us. They soon offered us fresh coconuts!

A teacher and the pastor’s wife preparing coconuts for us! 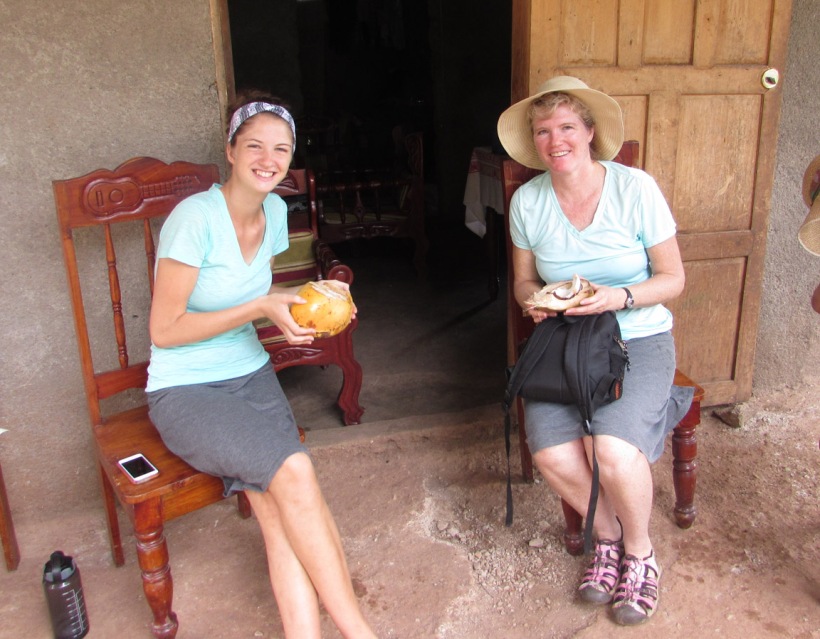 We were so thankful to just sit down!

Afterwards, we went into the church where the students were having school. There was no school building – it was demolished by the hurricane!

Marie Lucie took the opportunity to talk to the kids!

The kids were quite surprised with our visit that day! We enjoyed talking with them, taking their pictures and our visit with the Pastor, his wife, and some of the teachers. Now, time to descend! 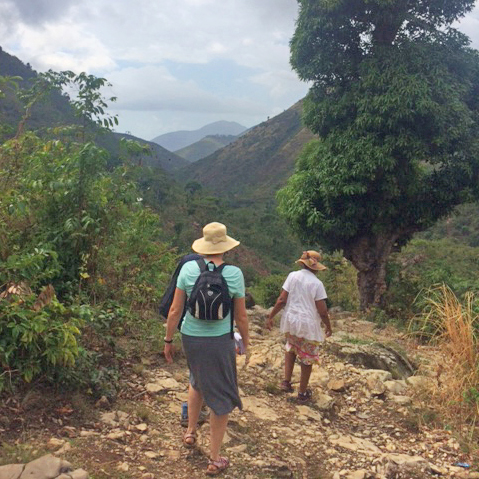 Here we go! Three hours back down!

It was still hot! We didn’t see anyone for a long time as we made our way down the path. The water was soon gone! It wasn’t long and we were very thirsty! Every time we walked through a river, we were so tempted to drink. But not knowing if it was clean or not, we didn’t! It was better to suffer now than later with some kind of parasite, amoeba, etc.!

A teacher went down with us and carried a box on her head the whole way!

As time went on, we were parched with thirst! It was all we could think about! If we could just have one drop of water! The thought of dehydration entered our minds. The heat was intense and my mind began to think about HELL. This must be a taste of what it must be like – just desiring one drop of water! Souls are at this very moment burning in the lake of fire…

“If your hand (foot, eye) causes you to sin, cut if off. It is better for you to enter into life maimed, rather than having two hands, to go to hell, into the fire that shall never be quenched, Where the worm does not die; and the fire is not quenched…” Mark 9:44,46,48; Isaiah 66:24

“And cast the unprofitable servant into the outer darkness. There will be weeping and gnashing of teeth.” Matthew 25:30

Our thirst and thoughts on hell stirred us to pray that the Lord would send souls on the path for us to talk to. This burned within our hearts to warn men of the sin and judgment and to share the good news! Christ came to deliver each one from the wrath to come!

Jesus said, “If anyone thirsts, let him come to Me and drink. he who believes in Me, as the Scripture has said, out of his heart will flow rivers of living water.”       John 7:37,38

We were so thankful that God sent people across our pathway! When we focused on their souls and their spiritually lost state, our thoughts of ourselves (thirst) was gone!. It took the focus off ourselves and on the spiritual depravation of others. It is not God’s will that anyone go to hell, where the fire is not quenched. We wanted souls to come to Jesus and drink of the living waters He gives. All this became very real to us during this downward journey!

We finally made it down the mountain with great thanks to our Almighty God!

The question we asked up and down the mountain: If YOU were to die today, where would YOU spend eternity?

Take the Good Person Test: Examine yourself with the Ten Commandments: Have you ever told a lie? How many lies have you told? (The Bible says ‘all liars have their part in the lake of fire.’ Revelation 21:8) Have you ever stolen anything, regardless of the value? Have you ever taken God’s Name in vain or used it disrespectfully? Have you ever looked with lust? God’s Word says it’s the same as adultery (Matthew 5:27,28). Have you ever hated someone? God’s Word says you are a murderer (1 John 3:15). If you have done these things, God sees you as a lying, thieving, blasphemous, adulterer and murderer at heart. God sees every thought, word and action you have ever committed. He is holy and just and cannot tolerate sin in His presence. (You cannot be justified by keeping His law. No one is good.)

“The heart is deceitful above all things, and desperately wicked; Who can know it? I, the Lord, search the heart, I test the mind, even to give every man according to his ways, according to the fruit of his doings.” Jeremiah 17:9,10

How many times have YOU broken God’s laws? If God judges you by His perfect Ten Commandments, would you be innocent or guilty? The Bible says the sinful will not inherit the kingdom of God (1 Corinthians 6:9,10). You have a disease of sin! If you are guilty, He will sentence you to eternity in hell (Revelation 21:8). Jesus described hell as a place of everlasting fire and punishment, of weeping and gnashing of teeth, but it isn’t God’s will for you to go there. Sinners broke God’s law and Jesus paid their fine. He is the cure of your disease of sin! (Sin must be paid for, either by the sinner himself in hell, or the perfect substitute, Jesus Christ.)

“For God so loved the world that He gave His only begotten Son, that whoever believes in Him should not perish but have everlasting life.“ John 3:16

What is God asking of you? “Repentance towards God (because you broke His law) and a faith in Jesus Christ…” Acts 20:21

God is rich in mercy towards them that fear Him, and looks to that man who humbles himself with a sincere repentance (sorrow, confess, and turning from sin. Proverbs 28:13… complete change of mind and direction!), and a faith in Jesus Christ, who took your place for your sin, shame, and His wrath. The Bible says that if you believe that Jesus died for your sins and rose again (Romans 1:4), you will not come into judgment, but you will pass from death to life (John 5:24). When you trust that only Jesus can save you, not your traditions or good works (Ephesians 2:8,9), God declares you righteous or innocent. This is good news!

“For He made Him who knew no sin to be sin for us, that we might become the righteousness of God in Him.“ 2 Corinthians 5:21

A beautiful butterfly we saw along the way! “If anyone is in Christ, he is a new creation.” 2 Corinthians 5:17

Is YOUR name written in the Book of Life?

“And anyone not found written in the Book of Life was cast into the lake of fire.” Revelation 20:15

“He who believes in the Son has everlasting life; and he who does not believe the Son shall not see life, but the wrath of God abides on him.” John 3:36

“Seek the Lord while He  may be found, Call upon Him while He is near. Let the wicked forsake his way, and the unrighteous man his thoughts; Let him return to the Lord, and He will have mercy on him; and to our God, for He will abundantly pardon.” Isaiah 55:6,7